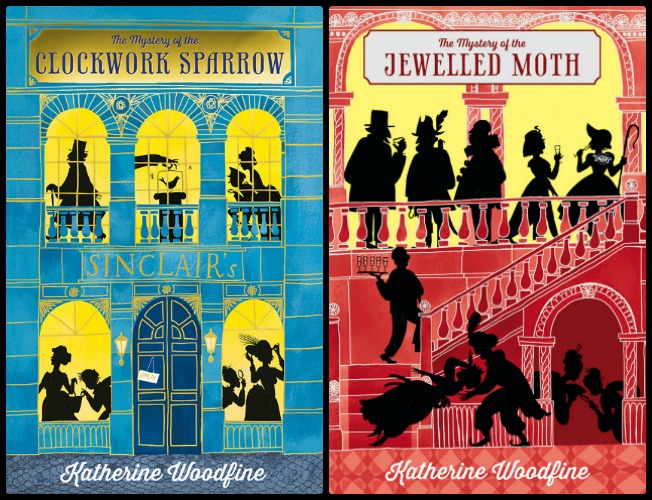 Katherine Woodfine is the author of the bestselling The Mystery of the Clockwork Sparrow and The Mystery of the Jewelled Moth. A true champion of children’s literature, until 2015 she worked for reading charity Book Trust, on projects including the Children’s Laureate and YALC, the UK’s first young adult literature convention. She now combines writing with other children’s books projects, including continuing to run YALC, and Down the Rabbit Hole, a monthly radio show discussing children’s books.

My mum still has it in a box in her attic and when I came across it recently it really made me smile because many years later, my first published book – The Mystery of the Clockwork Sparrow – was also all about a mysterious jewel theft!

My first and most important piece of advice would be to read as much as you can! By reading lots of different books, poems and stories, you’ll learn a lot about how writing works and what you like (and what you don’t like!) as well as getting ideas for writing you might like to do in the future.

I would also recommend trying to write as regularly as possible. Think of writing as being a bit like playing a sport or a musical instrument – it helps if you practice! It can be any kind of writing you like – a diary, a blog, stories, a comic-strip, or whatever you enjoy writing most. I was an avid diary-writer from the age of about 11 until I was 18, and all that time that I spent writing really helped me a lot.

What was the inspiration for The Sinclair’s Mysteries series?

The Sinclair’s Mysteries are inspired by some of the books I loved when I was growing up. I liked reading mystery series like The Famous Five and Nancy Drew, as well as classic children’s books written in the 1900s, like The Secret Garden and A Little Princess by Frances Hodgson Burnett, or The Railway Children and The Story of the Treasure Seekers by E Nesbit. I’ve combined a little of both for my own series of mystery stories, set in a London department store in 1909.

My books are also inspired by real-life history. I love reading about history, which can be a great way to find ideas – often things that happened in real-life are stranger and more incredible than anything I could make up! For the Sinclair’s Mysteries series, I took inspiration from the real stories of London’s first department stores. Shops like Selfridge’s were really exciting and glamorous places in the 1900s, and they seemed to me to be the perfect setting for a mystery story. You can read lots more about the history behind the books, and the story of real-life Edwardian department stores, on my website.

What can we expect from your event at the Bath Children’s Literature Festival?

I’m really looking forward to my event at the Bath Children’s Literature Festival – I’ll be teaming up with author Julia Golding, who writes the brilliant Mel Foster series to talk about mystery, mayhem and adventure!

We’ll be discussing our mystery books, the inspiration behind them, and what it is that makes us want to write detective tales. We’ll also be talking about Mystery & Mayhem – a new anthology of short mystery stories, which features stories by Julia and I, as well as lots of of other authors including Robin Stevens and Frances Hardinge. The book gives readers a chance to become detectives themselves, by seeing if they can work out the mysteries before the heroes of the stories.

Dare to Write: Below is a description of the clockwork sparrow from Katherine’s book The Mystery of the Clockwork Sparrow. Use it as inspiration to create your own precious object, and describe it in as much detail as you can. Where has it come from? Who made it? What’s going to happen to it next?

‘… a tiny, ornate golden bird, beautifully enamelled and glittering all over with gold and precious stones… It was so small, so richly jewelled, so perfect. She bent to look at it more closely, and for a moment, in the dim light, it seemed almost as if it were looking back at her. Its jewel eye glinted, as if it were winking.’